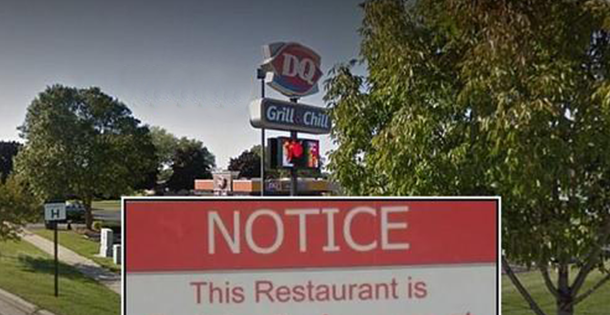 A Dairy Queen restaurant in Kewaskum, Wisconsin caught the eye with a door-to-door advertisement. This did not impress anyone until he noticed a person who did not live in this city.

The small table was not like the other stores that are usually “Welcome” “Merry Christmas” and “Happy Easter”. “We salute and honor the flag,” is written in bold letters “In God We Trust”. This is an honor people give to the army, the military, and the navy.

Kevin Scheunemann says that it seemed appropriate for him to put up a sign honoring the army and God.

The visitor from Oregon took a photo of the billboard and posted it on Facebook. According to him, this was very offensive and he immediately asked to meet the owner. The photo also went viral on the internet.

The post was deleted from Facebook after a few days due to the great attention it received and that many people thought that what was written there was right and some wrong. Threats were not absent.

Many people from different places traveled to the store to see the hanging sign whether it was real or not. According to the owner, if someone does not like it, they may simply not enter the store.

Wisconson State Representative Jesse Kremer visited the store and posted a photo thanking the Oregon visitor for helping Kewaskum Wisconsin become a popular tourist attraction. FYI has been holding this chart for years and will continue to do so.

City dwellers do not find it disturbing at all. Dairy Queen says that the only thing they want to do very well and attract attention is customer service.

The owners of Dairy Queen in other countries have the same opinion. So, they expect their franchisees and employees to treat every person who walks through our doors with the utmost dignity and respect. Therefore, nothing less is acceptable.