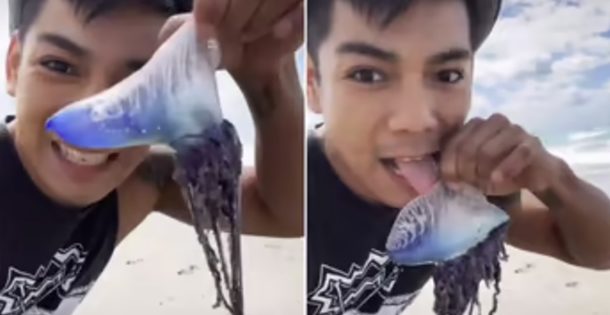 TikToker films himself picking and licking a bluebottle or as it is known a Portuguese man o’ war jellyfish. He was filming himself when he found the bluebottle jellyfish. He held it with his hand and it was completely unaware of the danger.

After licking the blue bottle jellyfish, he screams and runs away and claims he was stung inside the mouth.

He licked the mysterious creature without knowing what would do to him. What he was holding in his hand, is also known as floating terror or Portuguese man o’ war, and it appears at a beach in Texas.

Alexa Reed shared the video of his encounter with the strange creature that he found on a shore. He pokes it with his bare finger and says it is so slimy and cold, I am going to pick it up.

Look how long the string is, I am going to lick it. After that he said it stung me, and I got stung by a jellyfish.

The jellyfish is known for its explosive stinging cells and poisonous venom, which can cause serious issues and even death.

It is prevalent in Australia and it is responsible for an average of 10 thousand human stings each year.

The venom can travel through lymph nodes and can cause airways to block and the inability to breathe, even cardiac arrest.

It can cause fever and shock, and it may result in death. Viewers informed him of how foolish he had been.

People commented and were very afraid of his health. They say that he is playing with his life.

Those who are stung by the jellyfish should place the area in hot water and remove the stingers.

The video went viral quickly with more than 600 hundred likes. We do not know if he is doing okay now.

We wish him a speedy recovery!