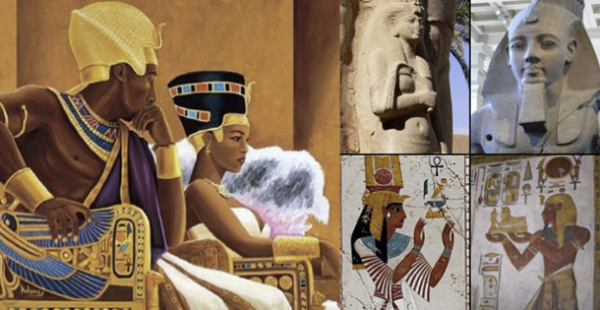 His kingdom was the largest and longest. He was very famous and was called by the Egyptians the “Great Ancestor”. He was smart, strong, explorer, king, and a great warrior. He is also distinguished for his missions in Nubia. He also owned many lands in the Middle East. Yet his love life did not seem very stable. He had approximately 200 wives and 150 children. But historians show that he knew how to truly love, and for him, the first and greatest love was Nefertar. She was his first wife, and they were married at the age of 23. She was a smart, beautiful, nice, educated, strong woman, and had incomparable diplomatic skills.

She became Pharaoh’s greatest support and helped him in political negotiations. Historians even say that she helped Pharaoh make 100 years of peace with Nubia. According to the manuscripts, they were married before Ramses became king, and that their love was very great. He loved Nefertar very much and wanted to spend his life with him. She went everywhere with the king. Pharaoh, out of great love for her, built a temple named after her. He placed her statue and his statue in front of the royal palace. They had a nice relationship, and it seems that Pharaoh was very romantic. He called the queen by different names like; Lady of All Earths, Wife of God, Lady of Egypt, Sun, etc.

He also took care of her grave. He was distinctive and very luxurious. Diamonds, jewels, pearls, and various ornaments, are placed in the tomb. Pharaoh’s dedication stands out in the tomb: “My love is unique – no one can rival it, because she is the most beautiful woman alive. “Just passing by, she stole my heart.”