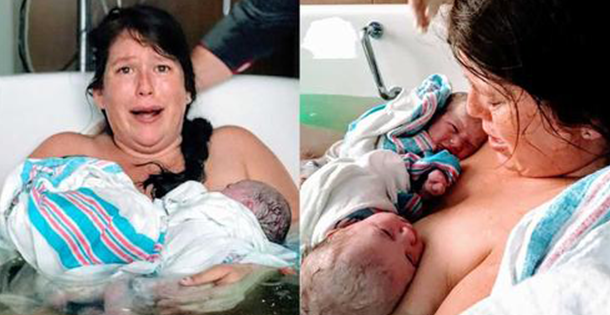 Surprise! You Have Just Given Birth To Twins! Oh, f—! Were The Words That Sprang To Mind

In this article, we will see the surprise that this mother received when she gave birth. She found out she was pregnant but did not want to do the ultrasound since she was planning to have a home birth.

During her pregnancy, the mother felt sick almost every morning. She also has a terrible migraine. Her midwife suggested having an ultrasound.

On July 12th her water broke and then it took her more than 24 hours to go into active labor. Unfortunately, the situation was not favorable for her to give birth at home so the next day she was taken to the hospital.

After arriving at the hospital, the woman was put in a vast birthing tub. Her sister Kate was there to assist also since she herself had given birth at home a few years ago.

The contraction became more and more often and it was time to deliver. It took only two pushes and the baby was there.

After this, a massive contraction was felt. No one knew what it was but the mother felt it. She pushed and after another two pushes the second baby was brought to life.

Everyone was shocked and surprised. The two babies were named Ada Maze and Billie June. They were both healthy and were the same size and weight.