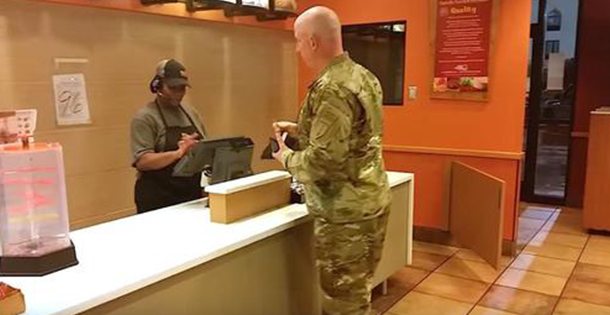 Robert Risdon is a uniformed soldier who went to have a meal at a Taco Bell restaurant and had no idea that he was being recorded when something unusual took place. He saw two boys who were doing something suspicious and knew he had to take immediate action.

The man who recorded the whole thing is Jason Gibson who at the time was eating dinner by himself. What happened is that two young boys were standing in front of the restaurant and Risdon happened to overhear what the boys were saying to each other and understood what they were going to do.

The two boys, who were 9 and 13 years old, were planning to sell some desserts that were homemade, in order to earn some money to donate to their church. Being that it was dinner time, Risdon wondered where their parents were.

Risdon firstly asked them if they had had dinner already. They hadn’t eaten. Risdon decided to buy them dinner and told them they could have everything they liked.

Gibson was very touched by this gesture and caught the whole thing on camera. He later shared it on his Facebook page, encouraging this nice gesture and thanking Risdon for it. All the people who saw and shared this video on Facebook were touched by the gesture and applauded it.

Robert Risdon is a father of two who later said that he did what felt right. When he saw two hungry kids in the street who were wet and cold, he just couldn’t look away and ignore them. According to him, it was something that anyone else would have done if they were at his place.

He also said that he felt like it was his duty to help them is that he is a soldier whose mission is to help people in need.

The world we live in today would surely be a better place if more people were like Risdon. Share your feelings regarding this article in the comments section on Facebook.