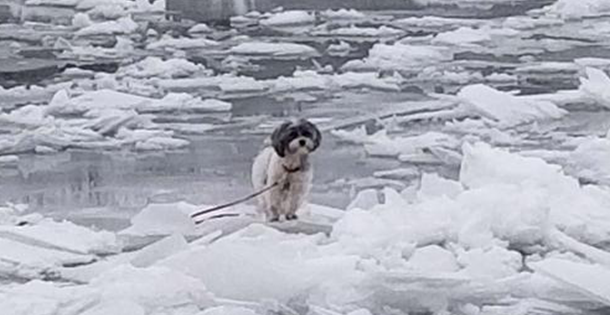 The Fire Department of New York made it possible to rescue a small dog that was stuck on the River of Seneca. This happened on Thursday when the officers received a phone call about a small dog that had broken away from its owner.

The little dog went chasing geese and found itself stuck in the ice-covered river.

The Shih Tzu pawed over 30 yards but then got stuck because its leash, unfortunately, got stuck on the ice. The firefighters responded immediately to the rescue call and went to the scene. Once they arrived, they started working using some specialized equipment made for ice rescue.

They were wearing ice rescue suits while crawling into the ice to reach the little puppy. The rescue was made possible by freeing its leash and then slowly leading the puppy out of the water and back to the land.

The department shared this story also on their Facebook account, accompanied by some pictures from the rescue. As seen in the pictures, the firefighters were crawling on their stomachs in the ice to reach the dog.

A lot of people from the community took the chance to thank the officers for being able to find the time to rescue a little puppy.