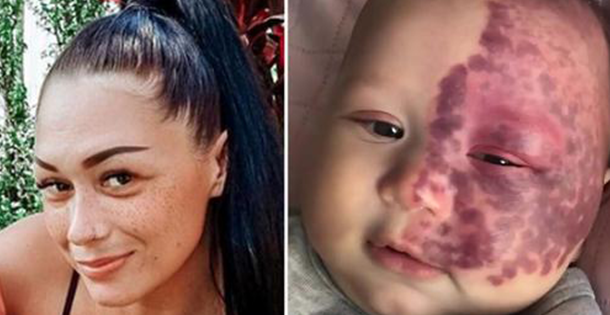 Mom Labeled A Monster, After Helping Her Son Get Laser Treatments

Such news often makes situations very disturbing. This is the story of a young mother with two children. The event went viral after the strange decision that Brooke had made. Therefore, the mother was labeled a monster after she gave permission for her second child to undergo an operation that would change his appearance.

This had serious consequences for the baby. For this reason, many people call Brooke an irresponsible mother. While some others address her with the word “monster mother.” Her second son Kingsley took part in an operation that left some marks on his body.

He was born with some birthmarks on his face.

These marks were greatly enlarged and spread over half of the face. This terrified his mother. The doctors warned that this could progress and the child could suffer from Sturge-Weber Syndrome or glaucoma. Great fear also pushed Brooke to make such an important decision.

She shares her child’s condition on Instagram. The frightened woman says that she did not want her child to suffer from glaucoma. This prompted the woman to undergo laser surgery on her child. But the baby’s condition worsened and his eye may be swollen.

The parents had requested that the condition of the child be kept under observation every day. This would decide whether the child would be operated on or not. After the doctors observed the condition, they realized that the child could become blind in one eye.

In this emergency, his mother decided that the child should be treated with Laser and she was labeled as a monster.

The child had problems after birth. However, his mother says that she has no intention of reducing the marks on her son’s face. She is afraid of the spread of bigger diseases.

The doctors also advised her to permit for her child to be operated on because his health was at risk. After sharing the news on the Internet, many commentators began to insult Brooke, accusing her of harming her child. However, she also received many positive comments.