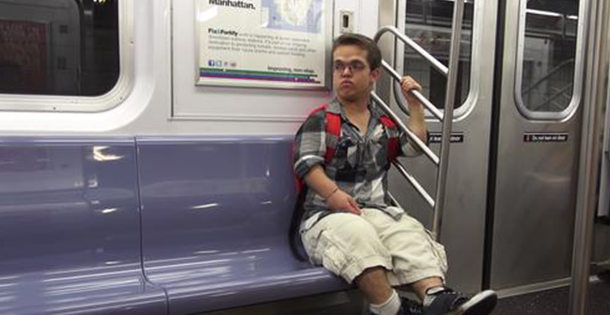 We all are aware of people that treat other people badly. A 22-year-old guy called Jonathan Novick is with dwarfism. He has recorded a video to show people how people like him are treated.

He was diagnosed with achondroplasia, a form of dwarfism when he was too young.
What is achondroplasia? It is a genetic condition that affects a protein called fibroblast growth that affects the growth of bone in the cartilage of the growth plate. The person that suffers this stays below average height.

His childhood was as he says fairly but things changed for him when he moved to new york city. As we said, people nowadays do not have nice behavior toward people that suffer from these things. They get bullied and treated in the worst conditions a human being can be treated. For this reason, he wore a hidden camera while walking around the city and created the documentary “Don’t Look Down On Me.”

With his eyes and in his shoes you can easily see and feel how it is to live in the skin of these people. People forget they are human beings and as normal as others, have feelings, and have families. Well if you see the video people call him names, screamed, yelled, and stared like he was a criminal.

He wanted to tell people how it is to suffer from these people that you can not call humans because there is no need to bully people, scream at them, or yell like they were animals that do not understand a single word.

He claims that it is important to let people know how he is treated and what happened to him. His confession was truly eye-opening. Please share your comments with us.