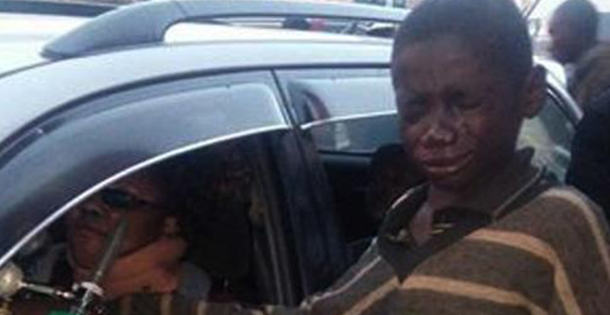 Homeless Boy Approaches Car To Beg For Change, When He Peeks Inside, He Bursts Into Tears

Some people look at others who are poor with mistrust. They think that people who ask for money on the streets are thieves or delinquents and are looking for everything they can get.

But, people who are poor are more often to be empathic or generous than others who are rich or have a comfortable life.

And the right example of this, is John Thuo, a little boy who lives in Nairobi, Kenya. Like many other kids of Nairobi, he begs for money on the streets.

He proved himself that he not only is not a thief or anything like that, but he has a golden heart.

One day, he was approaching a car to ask for money, but when he looked inside, he was struck by something he didn’t imagine.

The driver was breathing oxygen out of a tank and was hooked up to tubes. The driver was 32 years old Gladys Kamande and she explained to the little boy that her lungs collapsed.

In order to stay alive, she had to carry the oxygen tanks with her. The little boy, named John realized that there are other people in the world who are worse than he is because they aren’t healthy.

John was moved to tears and offered all the money he won that day so he can help her a little bit.

Passersby captured these moments on camera and shared the story on the internet, and it quickly went viral.

Many things happened, and thousands of donations poured, counting more than $80,000 for Gladys to receive treatment in India and for John to be rescued from the streets and find an adoptive and loving home.

John was adopted by Nissy Wambugu who gave him a fresh start and the golden opportunity to study and have a great life.

His kind gesture gave him a mother, and home and helped Gladys to find treatment.