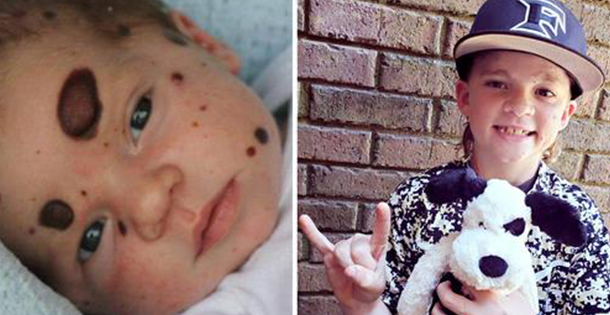 Dylan, The Amazing Boy Who Proved His Doctors Wrong So Many Times

It is heartbreaking just to think that a young child has to suffer from cancer. Many of them battling give us inspiring strength. The story we are going to tell is uplifting and amazing.

Dylan Little was born nine years ago, and doctors knew something was not going right. His skin was dark red and the rest of his body had rare birthmarks.

He was taken to the NICU and it became clear that he was suffering from Congenital Melanocytic Nevus. His family was shocked.

His birthmarks were bleeding, and his whole body was covered in moles. He had undergone a PET scan and MRI check.

He also had several melanin deposits in his brain, causing him to have seizures when he was 4 months of age.

He had a high risk of developing skin cancer. The doctors wanted to surgically remove the mole in his back. They inserted implants in his body. He had 26 surgeries and his mole was removed.

He has surgeries every three to six months. But despite everything he remains a happy boy proving everyone wrong. He feels like he owns the hospital, he loves anyone.

He refuses to hide and explains to everyone why his skin is like that. He has undergone 33 surgeries and with a positive outlook. He loves fishing and baseball. He is living his life to the fullest.

He continues to be hospitalized from time to time, but everything is going fine for him. We love you, brave boy! Keep going!

Published in Blog and Story