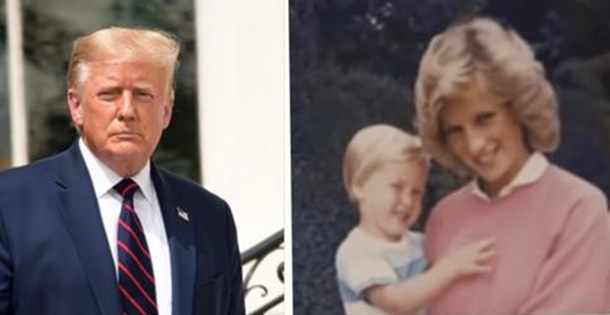 The former president of the United States, Donald Trump, is also known for his several marriages, and affairs. In this article, we will see how he tried to go after Princess Diana when he was still married at the time.

In 1977, Trump married his first wife, Ivana, whom he met at a restaurant. She was a model, and he was a real estate mogul at the time. Seven years later, Trump had an affair with Marla Maples.

Marla was deeply in love with Trump, as she also said in an interview, she was romanced and it was very hard for her to say no. She was younger than Trump, but she says it was her choice and she was happy about it.

In 1993 they got married after Trump brought an end to his marriage with Ivana. Marla had been waiting for him during all that time, hiding and staying low. The couple had a daughter together, named Tiffany Trump.

Only two years after their marriage, they attended a charity gala in New York City where Trump got to meet Princess Diana. He invited the Princess to his famous golf club named “Mar-a-Lago”.

At that time, Princess Diana was seeing Theodore Forstmann and declined Trump’s invitation. He then sent her flowers in 1996 when he found out she had divorced Charles.

To Princess Diana, this felt like Trump was stalking her since he kept sending her flowers from across the Atlantic. She said that it gave her the creeps. But for Trump, having Diana by his side meant a lot. He saw her as a trophy wife, the ultimate trophy wife.

When asked about it in 2016, Trump did not accept that he had in any way pursued Princess Diana. He only said that she was lovely when he met her in New York but that the accusations of him pursuing her were false.

What do you think? Did Trump try to go after the Princess? Share your thoughts about this story in the comments section on Facebook.