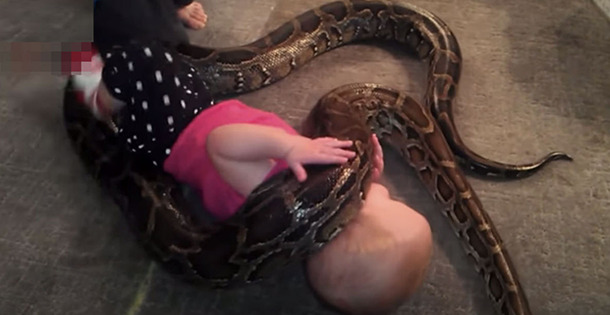 We all know that snakes are considered ruthless predators to live in the wild. But despite that, some people keep snakes as their house pets. This is allowed as long as you can take care of the snake.

This recent video made the net when a father let his toddler play with a python. He was present when this happened. This snake is his household pet and the video received a lot of criticism.

People saw that he was putting his daughter’s life in danger. He was calm because he raised the snake. He has been known as a snake charmer since he was a teenager. They are considered skilled professionals who hypnotize a snake.

This can be done by playing an instrument or waving around. He said that snakes are highly misunderstood. He thinks that snakes can be loving creatures too.

Python experts say that they are instinctive and not aggressive creatures. They are capable of causing harm to a creature five times its size. They even attack handlers. They kill their prey with a method known as constriction squeezing the air from the prey until they suffocate.

But for James, they can distinguish the owner from food.

What are your thoughts about this? Should this be illegal?