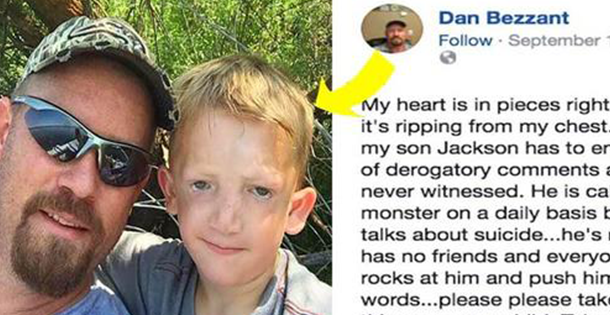 After His Son Was Branded A Monster, Idaho Dad Teaches Bullies A Brutal Lesson

Bullying has been at schools forever, exactly at the place where children should feel safe and protected.

Schools simply ignore problems and just assure parents that these things never happen. But this is not true at all, even though when they take action, this doesn’t put a stop to the problem at all.

A person that has been affected by bullying for a long time may have the inability to socialize later in life, or low self-esteem.

A boy diagnosed with Treacher Collins Syndrome was branded a monster and ugly by other students, and his father decided to step up for his son.

The boy was nearly deaf and also had distinctive abnormalities on his face. He underwent surgery and is also expected to have more surgeries in the years to come.

He has been severely bullied at school. After he learned that his son was being bullied, he decided to pour his heart out through a post he shared on social media.

My heart is in pieces now, and my soul is ripping from my chest, he said. My son has to endure many comments and ignorance like I have never witnessed. He is called a monster on a daily basis and he talks about suicide.

He has no friends and everyone hates him. Others throw rocks at him and shout horrific words. Please educate your children about special needs. Think for a moment if this were your child.

The father wants other parents to read it and learn something from it. Please educate your children and tell them bullying is not OK, he added.

The post went viral and some kids reached out to him and told him that they wanted to be friends with his son.

We are so happy that there are people in the community that didn’t stay deaf to this plea and we hope other parents educate their children to treat others fairly and with respect.