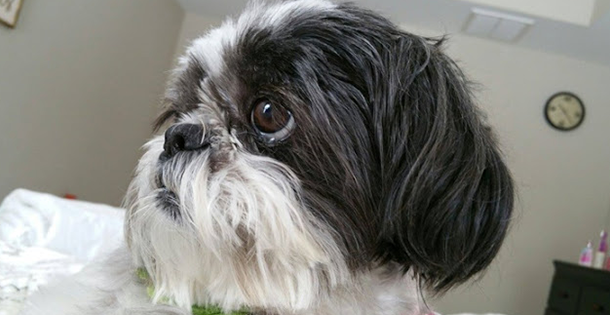 MAIN HEALTH PROBLEMS THAT SHIH TZU MAY HAVE – It is known that each breed is predisposed to some specific health problems due to its characteristics.

Our Shih Tzu do not escape this and unfortunately, they are also subject to some of these evils, we will see below:

The shape of the Shih Tzu’s eyes brings the possibility of constant tearing, causing stains in the hair around the shih tzu’s eyes, in addition to the discomfort caused by excessive tears. And the more hair around the eyes, which keeps getting in, stuck to the eyeball, the greater the tearing will be.

Progressive retinal atrophy can reduce vision or lead to blindness.

Progressive Retinal Atrophy (PRA) is a slow process of retinal tissue degeneration, with a genetic background, transmitted by recessive genes. Therefore, in several countries, race entities demand that future breeders are evaluated and those with the genes for PRA be sterilized, as a way of reducing the incidence of the problem.

It is a disease that does not cause ‘pain’ to the shih tzu, and does not cause external manifestations such as redness or increased production of tears. For this reason, most dog owners do not notice any of the stages in the evolution of the disease.

Eventually, some may notice an abnormal glow in their dog’s eyes, caused by pupil dilation, which fails to react quickly to stimuli.

Parents of puppies that when they present this problem (even if adults already) should be removed from breeding.

It appears very early, after weaning, some shih tzu puppies show the first symptoms, but they can also manifest later only. Loss of appetite, increased water consumption, indisposition, in some cases the shih tzu begins to drink its own urine, which becomes very weak in color.

It should be treated as soon as possible, as it can lead to death in the shih tzu, and there are cases where proper treatment and early reverse the case. A dog with mild or moderate kidney failure can live long years with proper care.

The problem of malformation of joints that make ligaments between the thigh, femur, and pelvis. is detected by the behavior of the shih tzu, if he starts to have difficulty walking and “complains” we should take him to the veterinarian for an X-ray or an MRI for the diagnosis.

If you have acquired a puppy that has this problem, you must, for the love of the breed, inform the owners of the parents, as they must be excluded from breeding because their puppies will always present this problem that is passed on genetically.

Dermatitis is the allergy that most affects Shih Tzu. Intense itching and ugly wounds may appear, even though it is clean and it scratches a lot, it should be checked if there are no fleas or other allergic problems that may be from the material used in its hygiene.

The lack of complete drying of the shih tzu’s fur can also be the cause of itching and the appearance of fungi that cause dermatitis. Products we use for cleaning at home can also cause allergies, and it may not just be dermatitis, it may also be respiratory allergies.

We must never fail to take him to a vet in case of any doubt regarding his health, as the delay can be fatal.

I left out something important about ticks, in case you find a tick on your shih tzu, never squeeze it, or crush it, this act can spread eggs around your house or place where they are. If you don’t know if it is female or male when in doubt, the best thing is to take a cotton ball soaked in alcohol. Put the tick in it and in a small dish or safe place, set fire to it, and destroy it and any eggs that the disgusting person carries.