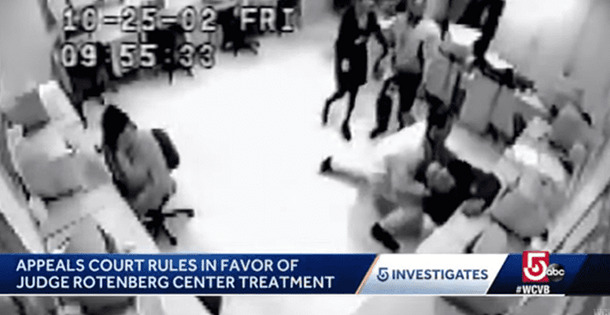 For more than half a century, Massachusetts school for the developmentally disabled has been one of the most controversial schools in the US. It has been giving electric shocks to students for years and years.

Now a court says that it is absolutely fine to continue to do this. Last year the US Food and Drug Administration banned the use of electric shock and said this is an unreasonable risk of illness and injury.

The court overturned the ban this week allowing again the school to continue to use shock treatment. They felt that this was a victory for the institute.

They claim that this is the last treatment used for the kids. A lot of criticism from disability rights advocates have been faced. They give electric shocks for any kind of reason. Once in a video, Andre McCollins was tied and shocked 31 times for seven hours because he did not remove his jacked when they told him so.

Andre has been hospitalized for more than a month. He was listened saying Stop! Stop! That hurts!

Another horrifying incident was reported when two teenagers were shocked for misbehaving, while the staff claimed they did not misbehave. and other students said the same. But they did as the supervisor said.

More than 120 shocks were given to the two teens and that call turned out to be a prank call later on.

Rico Torres tells that he was shocked with electrodes attached to his legs since he was 8 years old.

If he misbehaves the teacher would push a button that has Rico’s photo in it and he would feel a jolt of electricity through his body.

I didn’t wake up one time and she shocked me, and then she shocked me again. Rico now is 24 YO and is against this treatment. They are just taking people with issues and building more issues for them.