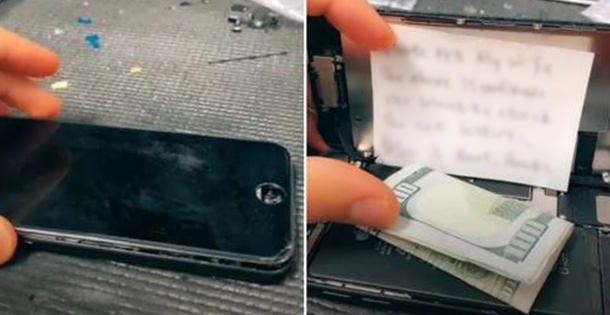 Husband Leaves $100 And Secret Note In Back Of Phone For Repairman, Wife Discovers It

Something unusual happened to an iPhone repairman who found a $100 bill in the back of an iPhone that someone had brought to him for repair. Together with the bill, there was also a note that explained to the repairman that the money found in the back of the phone was hush money.

The repairman shared this unusual thing in his TikTok account and told his followers that the man that brought the phone in order to be repaired, actually did not want to repair it for real.

Instead the man wanted the repairman to say that the phone was unfixable so that his wife wouldnàt find out what was inside the phone. This is what the purpose of the money was.

Mani, the technician, said that the man walked inside the shop with his wife and asked him to fix the phone. Mani said that it would be ready in just an hour. The couple left and when Mani got back to work, he saw that inside the phone there was a $100 bill.

There was also a note that said that the wife wanted his phone to be fixed so that she could check the call history. Not knowing what to do, Mani asked his followers on TikTok.

Everyone wanted to help Mani resolve this moral dilemma, but Mani decided to tell the wife that he couldn’t fix the phone because of something he found on its back.

She finds out her husband’s little plan and offers Mani $200 to fix the phone.

The man gets back later and finds out his wife had already picked up the phone. He becomes very angry and starts making damages to Mani’s shop. Mani is okay and not hurt at all but of course he feels sorry that he had to become part of a personal matter like this one.