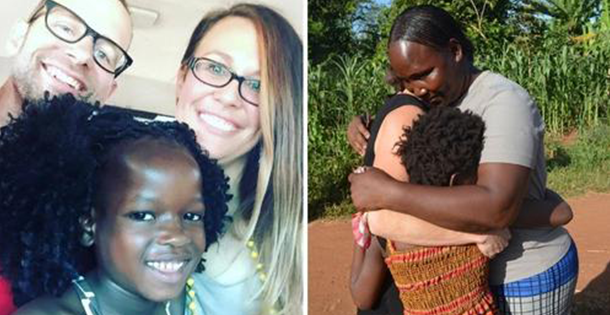 Adam and Jessica kept a very big secret inside for a long time. Everyone knows that the weight of a secret is very big. Therefore, it is not at all easy to keep a secret. Adopt is one of the happiest moments for some children.

Adam and Jessica also share this story. They adopt a 5-year-old girl named Namata. Since she was from Uganda she could not speak English.

Namata came from a poor family. Her father had died when she was younger while her mother had abused and mistreated her. The mother had not taken care of the little girl properly. Namata was traumatized and could not even talk to Adam and Jessica.

But for 6 months, the new parents managed to teach the little girl to communicate in English. There were 4 children in the Davis family. But Jessica and her husband were very happy to have another child.

Before they adopt Namate, they were informed that the little girl had a difficult past and lacked parental care. She was scared and traumatized. According to her guardians, she was physically and psychologically abused. This affected the girl’s communication.

Jessica says that their family was very happy and that they had the financial means to support the growth of their little girl.

They took care of Namate and she entered the first class. However, Jessica admitted that the little girl is not an object and that she does not deserve to be treated as an object. After this story, the State Department revealed some secrets that no one knew.