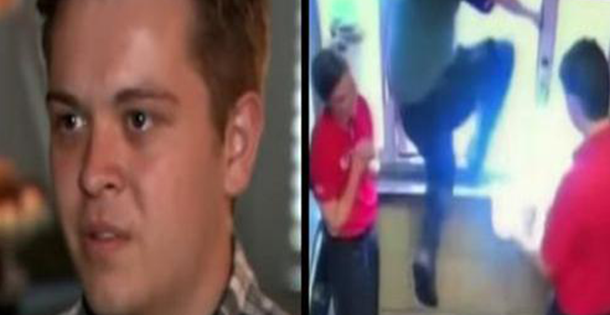 After Diving Out Of Drive-Thru Window And Saving A Child, Chick-Fil-A Employee Has Been Called Hero

Logan is a 19-year-old employee of Chick-fil-A who is now being called a hero for his brave and generous act.

He was doing his shift as regular that day when someone approached him and asked for help. This mother pulled up to the drive-through with her little 6-year-old boy in the car.

The seatbelt was over the little boy’s neck and the mother was begging for help. Logan Simmons did not hesitate but he jumped out of the window to help.

Fortunately, he did not panic but was very fast and leaped through the window, dashing to his car in order to be as fast as possible.

He thought that this was the best and most reasonable alternative. His goal at that moment was to help the kid and save his life.

He had a pocket knife with him and used it to cut the seatbelt, saving the kid from suffocation. He did not take any classes on how to assist difficult situations that might occur but attributed this to his active lifestyle.

Even though he practically saved someone’s life, Logan remains very humble and doesn’t brag about it.

He is considered a hero by everyone and the mother is extremely thankful to him.