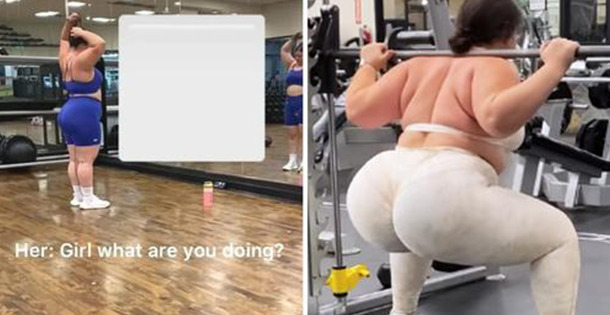 Bethy Red is a popular influencer on Instagram, TikTok, and Youtube for posting content related to exercises and fashion. She was recently exercising at the gym and was filming herself in order to post the workout later. But she caught on camera an unnamed woman that started to make fun of Bethy.

She was at the gym filming a video and minding her own business when an unknown woman asked her something. With a sarcastic tone, she said: “Girl, what are you doing?”

The unknown woman, whose identity Bethy did not want to show and covered her with a white box in the video, continued asking other questions, like: “Are you filming yourself?”. To these questions, Bethy responded with a simple, “Yes”

The stranger continued asking the reason why she was taking these videos of herself. Bethy replied that the videos were for her blog. At that moment the stranger laughed at Bethy and said to her: “Well, have fun”

After this strange encounter, Bethy just turned back to the mirror and got back to was she was doing earlier. The woman was packing her things and then when she started to leave, she just laughed even more. All Bethy did after was thank her.

People started commenting on the video, showing their support for Bethy. They all condemned the behavior of the unknown woman.

A lot of them were asking Bethy to remove the white mark that she had put on the woman’s face, but Bethy said she was not going to. She said that the message of the video should be that we need to try to stop bullying with kindness and not expose the particular person who was bullying her.

The strangers’ goal was to make Bethy feel insecure, but a lot of people pointed out that she was just trying to do that because she was jealous of Bethy’s confidence. Betty did not lower herself to the other woman’s level.

What did you think of this story? Share your thoughts with us in the comments section on Facebook.