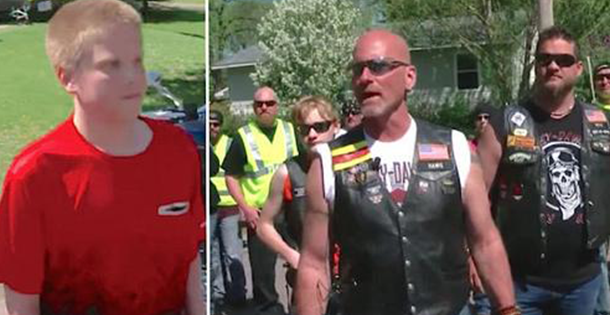 We have talked a lot about bullies all around us. In schools, streets, and in families too. Parents bully their children sometimes and we think we all have experienced it when our mom told us that the girl’s neighbor is smarter in school than us. There is always that girl in every story.

Let’s talk about Zane Omlid who was bullied so much that he did not want to go to school anymore. His classmates were calling him names and teasing him. As his parents report sometimes he was physically abused because he was punched and pushed. And guess what?

The school was not paying attention to the boy who was bullied. What happens next will make you feel so good about Zane because a group of bikers decided to show the students that bullied him that some thick guys had his back.

After the group arrived at Zane’s house they asked him to step outside and meet the group and his Founder Greg Carson. They took him for a bike ride to show that whoever was treating Zane wrong, now was over. Zane was so happy and grateful and hugged them all.

The bikers were so happy to see him and his family letting them know that they made a difference in his life. After all, who wants to bully a boy who has a “bad, thick, tough” bike group boys’ attention. Now the bullies know that their actions are supervised and tracking attention they don’t want.

What is important for the parents is to teach their kids that bullying someone is not okay. Parents, it is up to you to build a better world for the next generation. It should be enough with threats, bad words, rumors, and online sharing. Schools too, teachers too, there should be communication for every single tendency word said to the kids.