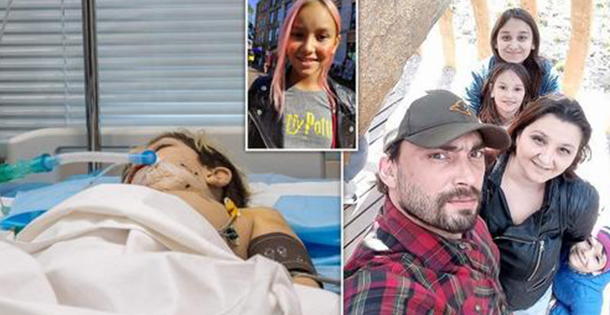 In Fight Against War, There’s No Price For Peace – War Against Ukrainian Children

Polina’s brother, who is younger than her, and her bigger sister, are currently in the hospital fighting for their lives.

What they don’t know is that their loved ones were killed in a kindergarten attack from a Russian Missile.

Polina was a young girl, killed together with two other members of her family, while they were in their car. It was the reconnaissance groups of Putin who ended their lives.

The parents, Anton Kudrin and Svetlana Zapadynskya lost their lives in a shower of gunfire together with their middle daughter.

Their other two children, Sofia and Semyon were put into a hospital as they were injured and are in critical condition.

They don’t know that the rest of their family is no longer alive.

A picture of the family has been shared online and it is proof that the war initiated by Putin, is ruining the lives of innocent and vulnerable people in Ukraine.

In just a week, 16 children have lost their lives and 45 have serious injuries.

The world was shocked when they found out that a young boy lost his life because he couldn’t get to the hospital.

The Russian troops shot down the ambulance that he was traveling with.

Polina was a 10-year-old girl with beautiful pink hair. She was a 4th grader at the time but didn’t get a chance to live her life as it was ended by the ruthless campaign of Putin.

Alisa Plans is another victim of this campaign.

She was only 7 years old and was among the six children who lost their lives in the bombed kindergarten.

She died in the hospital. The military of Russia was accused of putting cluster bombs that brought many explosions from one bomb, but they denied and refused to accept the charges.

Thousands of pictures have been shared from what is happening currently in Ukraine showing the results of this despicable war.